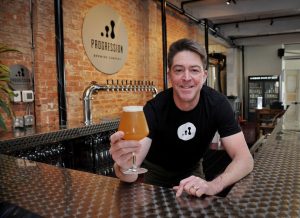 “Progress is often the combination of key factors coming together at the right time. That also holds true for Progression Brewing, the newest brewery in Northampton.

It is one of 26 breweries which opened in Massachusetts in 2018, from among a list of some 50 that were slated to begin business. All told, there were 129 breweries in Massachusetts in 2017, giving the state a ranking of 17th in the country and contributing $1.83 million to the state’s economy, according to the Brewers Association, based in Colorado. Just 45 breweries existed in the Bay State in 2011. There are now almost 60 breweries on tap to open in 2019.